The work of Eric Uhlfelder is driven by two major concerns: the beauty of urban form and the remembrance of things past.

The Parisian images are from a project Uhlfelder initially undertook between 1983 and 1991 when he studied the city's changing architectural character. His photographs of vernacular Paris evoke the city of Marville and Atget. From serpentine staircases, the rise of the Eiffel Tower, to the flow of the city's streets and river, the curve is Paris' most descriptive feature, and recurs throughout Uhlfelder's work. (please see "The Last Time I Saw Paris")

The black-and-white pieces of Venice [1987-1998] offer a very different look at this remarkable place. Reducing the city's wide range of colors to various tones of gray, the artist focuses on Venice's equally compelling composition: the juxtaposition of building and space, the integration of structure and water, and the outright splendor of the city's architectural forms. (please see "On Seeing Venice")

Venice in color looks at the city in a strikingly different manner. The walls of Venice are one of the city's most indigenous and anachronistic features. By focusing upon them close up, the surfaces of barns, railroad cars, building fenestrations, and interiors read as modern abstract art. (please see "Abstract Venice"

Over the past 30 years, Eric has also photographed New York, London, Prague, Milan, Rome, Frankfurt, Salzburg, and Dachau. Shooting in black-and-white and color, his portfolio also includes landscapes of the Dordogne, Normandy, Switzerland, the Veneto, eastern Long Island, and Maine. Commenting on Uhlfelder's black-and white work on Venice, the Italian designer Massimo Vignelli wrote: "For someone like me who spent years in Venice, the sites in Eric's book are familiar, but his photographs transform them into new unpredictable images, beautifully composed and bathed in a magical stillness."

Paul Goldberger, the Pulitzer Prize winning architectural critic of The New Yorker, described "Eric's Paris . . . as rendered fresh and new . . . full of energy . . . exhilarating, yet intimate, powerful, yet delicate, and ever so slightly mysterious."

Uhlfelder's exhibitions have included one-man shows at the national headquarters at the American Institute of Architects in Washington, the Casa Italiana Zerilli-Marimo and the Maison Française in New York, the French Library in Boston, and La Rotonde en Montparnasse in Paris. His work has been regularly exhibited at RVS Fine Art in Southampton, New York, and in Venice at Mozart Art Studio and Venice Design. 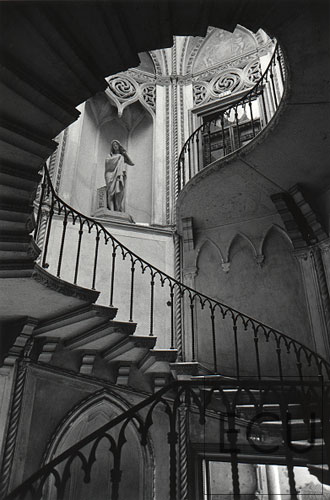